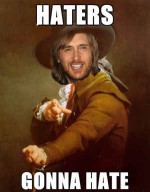 Hasta Frankie Knuckles hizo un gran comentario en un artículo que habla que David habla en twitter: “To all my fans, I’m sorry that you had to find out that I have been pre-recording sets and not playing live.”

Frankie Knuckles
Ive spent forty years at this craft of DJing. Every time I step up to play, to this day I’m scare beyond imagination. But I never let it get the better of me to the point where I would perpetrate a fraud on the public. I’d make a conscious effort to do my very best. Sometimes I was great, sometimes no so. But at least I tried and, thru this I gained the respect of the audiences I’ve been playing for over the years and my contemporaries.
I don’t think it’s disgusting the amount of money he gets paid. But I do think its disgusting that club owners and promoters around the will spend that kind of money on someone who doesn’t have the gift to do this job properly. And what makes it worse is his laughing in everyone’s face that pays good money to watch him perpetrate this fraud. David Guetta has believers and followers. The lie he perpetrates on every stage in every arena shows how much of a sucker he thinks these people are. In all my years I would never take the audience that believe in me into a place that would disrespect them. I sweat like a man on his way to the gallos throughout every set I play and, I prefer being close enough to the crowd so that they can see the hard work I put into keeping them entertained. Not every mix is perfect. But nothing in life is perfect. At least I make an effort. I too could pre-record my sets and act as if I’m doing it live but, I would know that I’m faking it. And so would anyone working with me or hanging around me. And when it’s all over and done with I have to live with myself.
I don’t walk in ths man’s shoes but I can’t imagine he has much of a conscious either. He’s a pop star of the Milli Vanilli variety. If nothing else at the end of my life it will never be said that I was a fake or charlatan.