AMBIVALENT – I’m not always able to ignore those voices, but when I ignore them, I embrace joy – Interview 2013

Kevin McHugh has spent the last decade living in the German capital or New York and in a sense; these two metropoleis represent the contradiction at the heart of his Ambivalent persona. His real name is Kevin McHugh. And he insists shouldn’t read too much into his ideas, but as long as he continues making such bold musical statements, that stimulate the instinct and intellect in equal measures, he’ll just have to get used to the attention. Here we have a different approach between his personallity, musical visions and inner feelings! Soon in Medellín, rocking this Febrary 2 in the MegaOpening 2013!

1- Just in case someone doesnt know you yet, briefly how and where you started as a musician ?

I was a DJ for many years, and released with my friend Camea on Clink to start, but it was a particular track that I made for Minus that put me in this career. Before that I was making music for myself and mostly organizing parties in NY to promote the artists I admired.

2- At school in what course where you the best/worst ?

My strength was in art classes. In music classes, I always wanted to rush home to my guitar, and didn’t want to play boring songs. I wanted music to have chaos and energy. And in any other subject, I was a failure. Math was a nightmare. I wish I paid more attention in science, because so much of electronics and sound engineering relies on science.

3- The first time you came to Medellin, you told us that you had a disease that makes you grow slower than normal people, after some time we figured out you were joking with us (sight), but do you still think you can act / react / create / generate / think as a child ?

Hahaha I sometimes cause trouble for myself by playing games like that, and I forget something I said. I don’t remember saying that, but I can believe I would make some joke like that. And then I probably tried to see how long I could make you believe it. I think creativity always come from playfulness. Not stress. There are a lot of pressures in the business of music, and it’s easy to hear the voices telling you what you “must” do. I’m not always able to ignore those voices, but when I ignore them and embrace joy, I am much happier.

4- Do you support the use of looped samplers by others ? or you always create your own rythms ? now every day more and more artists are saling their sampler-packs so people can easily create ¨sounds¨ that before where unique by ¨the artist¨

It’s funny, I recently caused some controversy by saying this on twitter: “Musicians use instruments to communicate ideas. Synths, machines, etc. But if your instrument is “Loopmasters Sample CD” how is it your idea?” Some people really disagreed with that. But I feel strongly that music comes from making something with your mind and your hands. You can be twisting a sample into something else, or you can be tuning a machine to do it. But in the end, you can not just copy and paste a piece of sound and call it your idea. There are so many tracks sounding identical, because they all came from the same samples. That’s not music, that’s manufacturing. My favorite records always have some “flaw” or “problem” that makes them unique, and I know that no other artist could make the same exact thing. If someone isn’t trying to make the same result, there’s no reason to put it into the world.

4- What your favorite thing to do in a day that you have nothing to do?

I recently spent a day watching movies in bed with my girlfriend, and it felt like heaven on earth.

5- So at the end who dances/moves more to the music NYC or BERLIN ?

Berlin definitely wins on this. New York is changing a lot right now. When I was organizing parties and DJing in NY from 1997 – 2006, there were changing waves. Lots of people for a few years, and very few people other years. Ultimately NY is always changing. It’s impossible to say one thing about it. But Berlin is more steady, and has a long culture for dancing all night to great music.

6- Most scary/bizarre thing happened you during a gig ?

Two times I’ve had the power go out in the whole building during my set. The first time, it was an underground party in Miami. The whole place went completely black. No sound, no light, no movement. But when the power came back after 20 minutes, people were ready to dance.

7- What was the most risky thing you did for the music ?

In 2007 I had a very good job, with a good future. I had a good life with a path and some safety. I had a great girl who I wanted to be with. But I quit the job and focused on music, I moved to Berlin and asked the girl to stay with me. Six years later, the girl is going to marry me, and I am still making music. So I think the risk was definitely worth it.

8- How did you started 2013 where have you been and what are your next projects ?

I started 2013 with a crazy party with Gaiser and Matador, and went straight to a really fun party in Malaga, ES. A few more shows in Europe, and then I came to NY for some time with my girl and a much-needed visit to Medellin. I would say it’s a really good start to the year!!
You can see from my photo that I’m preparing for a good trip. :) 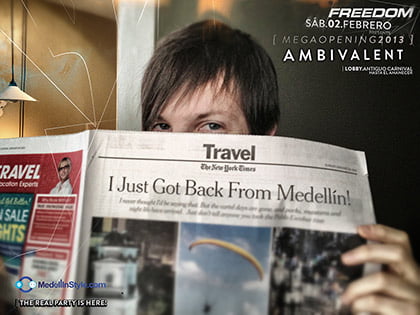